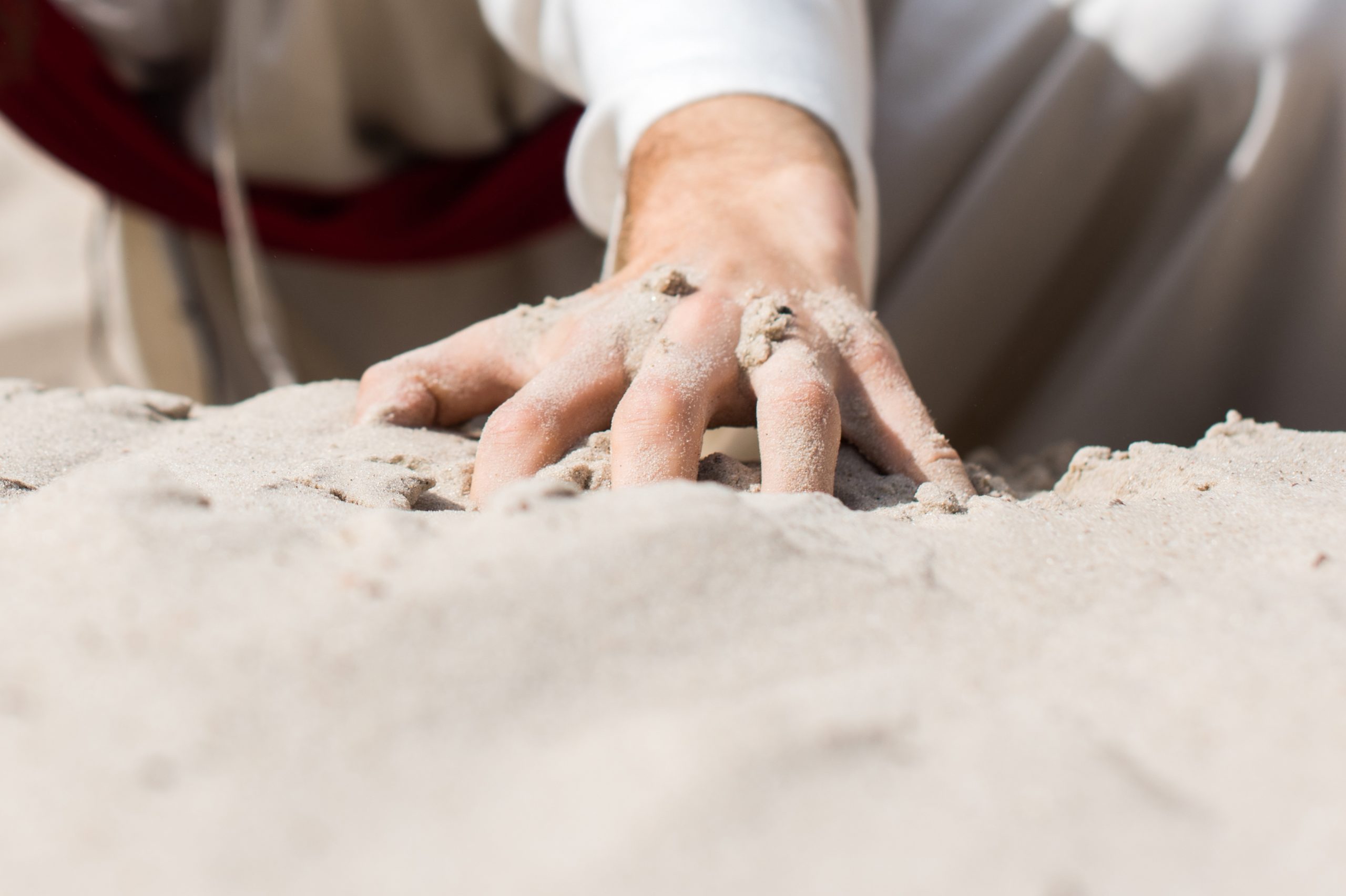 1But Jesus went to the Mount of Olives.

2Now early in the morning He came again into the temple, and all the people came to Him; and He sat down and taught them. 3Then the scribes and Pharisees brought to Him a woman caught in adultery. And when they had set her in the midst, 4they said to Him, “Teacher, this woman was caught in adultery, in the very act. 5Now Moses, in the law, commanded us that such should be stoned. But what do You say?” 6This they said, testing Him, that they might have something of which to accuse Him. But Jesus stooped down and wrote on the ground with His finger, as though He did not hear.

7So when they continued asking Him, He raised Himself up and said to them, “He who is without sin among you, let him throw a stone at her first.” 8And again He stooped down and wrote on the ground. 9Then those who heard it, being convicted by their conscience, went out one by one, beginning with the oldest even to the last. And Jesus was left alone, and the woman standing in the midst. 10When Jesus had raised Himself up and saw no one but the woman, He said to her, “Woman, where are those accusers of yours? Has no one condemned you?”

And Jesus said to her, “Neither do I condemn you; go and sin no more.”

Jesus is in the temple and while He sits, He teaches the people that came to Him. The Pharisees and Scribes brought a woman to Him that they claim were caught in the act of adultery. They are there to discredit Him and hope to get something to use against Him.

But instead He writes on the ground – what did He write? Why did He write in the sand? For some more context, let’s look at the previous chapter:

37On the last day, that great day of the feast, Jesus stood and cried out, saying, “If anyone thirsts, let him come to Me and drink. 38He who believes in Me, as the Scripture has said, out of his heart will flow rivers of living water.” 39But this He spoke concerning the Spirit, whom those believing in Him would receive; for the Holy Spirit was not yet given, because Jesus was not yet glorified.

40Therefore many from the crowd, when they heard this saying, said, “Truly this is the Prophet.” 41Others said, “This is the Christ.”

But some said, “Will the Christ come out of Galilee? 42Has not the Scripture said that the Christ comes from the seed of David and from the town of Bethlehem, where David was?” 43So there was a division among the people because of Him. 44Now some of them wanted to take Him, but no one laid hands on Him.

Rejected by the Authorities

45Then the officers came to the chief priests and Pharisees, who said to them, “Why have you not brought Him?”

46The officers answered, “No man ever spoke like this Man!”

47Then the Pharisees answered them, “Are you also deceived? 48Have any of the rulers or the Pharisees believed in Him? 49But this crowd that does not know the law is accursed.”

50Nicodemus (he who came to Jesus by night, being one of them) said to them, 51“Does our law judge a man before it hears him and knows what he is doing?”

52They answered and said to him, “Are you also from Galilee? Search and look, for no prophet has arisen out of Galilee.”

An Adulteress Faces the Light of the World

53And everyone went to his own house.

The plan to capture Jesus has failed (v 44-45) and the Pharisees & Scribes have to concoct a new plan to capture Jesus. They knew He followed the Law of Moses and decided to use that to lure Him out. They bring a woman to Him that they claim were caught in the act of adultery and when He fails to uphold the Law, they have something to convict Him by.

Still some additional context: but what does the Law of Moses actually say? It is important to know what the Old Testament Torah says to fully understand what Jesus’ sayings & parables meant.

“If a man is found lying with a woman married to a husband, then both of them shall die—the man that lay with the woman, and the woman; so you shall put away the evil from Israel.

Jesus KNOWS the Torah. He IS the Torah or the Law. So whenever His foes try to outsmart Him, He always quotes the Word. This is also our only weapon against Satan that works EVERY time!

Jesus knows that they are not acting in the best interest of God or the woman and quotes from the Torah or Law to thwart their onslaught against Him.

18And the judges shall make careful inquiry, and indeed, if the witness is a false witness, who has testified falsely against his brother, 19then you shall do to him as he thought to have done to his brother; so you shall put away the evil from among you.

They wanted to have her stoned but according to the Torah, the same Torah that they wanted to use to trap Him, they should be stoned, for bearing false witness.

But what did He write on the ground? Is it still important? Well He did it twice so it has to be important… Jesus is never interested in winning an argument – He wants to teach the truth. This opportunity is too good to pass and He seizes the moment to show the teachers of the Law and the people the true meaning of Torah – God’s justice and His mercy.

The last day of this feast, the eighth day, was renowned for its Water Drawing Ceremony where the priests took a golden vessel and filled it with living water from the Pool of Siloam (meaning the ‘sent one’) and brought it to the temple altar where it was used in conjunction with the sacrifice. When the high priest is busy performing the sacrifice, he quotes Jeremiah 17:13:

O Lord, the hope of Israel,

All who forsake You shall be ashamed.

“Those who depart from Me

Shall be written in the earth,

Because they have forsaken the Lord,

The fountain of living waters.”

When Jesus stooped down the second time to write on the ground, the Pharisees & Scribes, who attended the ceremony the day before, started to put one and one together and realised that Jesus, who proclaimed (John 7:37 & 38) that He was indeed the Living Water that was sent, where showing them, by writing on the ground, that they are the ‘departed ones’ Jeremiah spoke of.