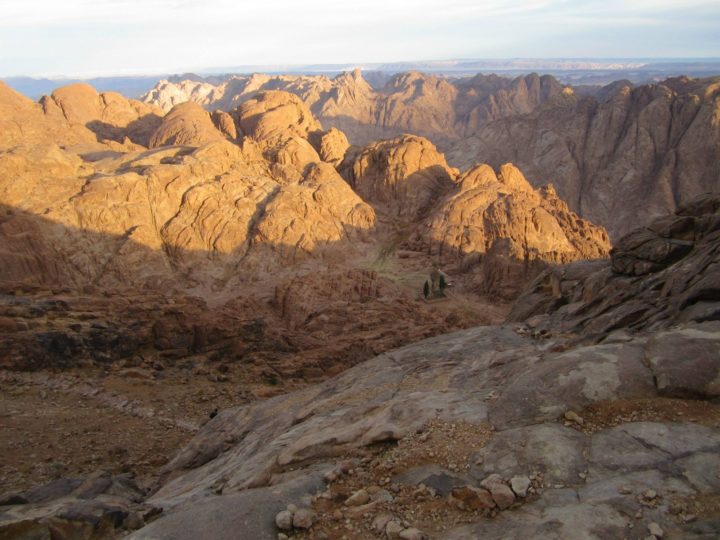 The traditional location of Mt. Sinia in the Sinai Peninsula is based upon tradition that was started by Constantine or his mother, both of whom claimed to have dreams of where biblical sites were located (Shown in purple below). The Old Testamant tells us in Exodus 19:1 that Israel arrived in the Sinai wilderness on the first day of the third month. Compare that with Numbers 33:3, which reveals that Israel departed from Egypt on the 15th day of the first month.

Mt. Sinai has to be in Midian: “Moses fled from the face of Pharaoh and dwelt in the land of Midian; and he sat down by a well” Ex. 2:15 NKJV. Maps indicate Midian is east of the Gulf of Aqaba in Northwest Saudi Arabia, in the area shown on the map below. Moses fled to a foreign land, not to the Sinai peninsula: “And she [Zipporah] bore him a son, and he called his name Gershom; for he said, “I have been a stranger in a foreign land” Ex. 2:22. Moses was in a different country, away from any Egyptians in Saudi Arabia. He could not have been in the Sinai Peninsula, as that area was Egyptian controlled territory, full of Egyptian mines and communication towers. Moses would have been easily captured in that area.

Midian and Horeb are in the same location: “Now Moses kept the flock of Jethro his father-in-law, the priest of Midian. And he led the flock to the back of the desert, and came to Horeb, the mountain of God” Ex. 3:1. Jethro lived in the vicinity of Mount Sinai. Jethro was the leader of the Midianites who were found in this area and East of the Gulf of Aqaba in the northwestern regions of the Arabian Desert. Jethro was Moses’ father-in-law as we saw in the texts above. He was from the town of Al Bad, according to the local people who live there today, which is only about 15 miles from Jebel el Lawz.

“So He [God] said, ‘I will certainly be with you. And this shall be a sign to you that I have sent you: When you have brought the people out of Egypt, you shall serve God on this mountain'” Exodus 3:12. Moses was to bring the children of Israel from Egypt to this same mountain in Midian, near Jethro’s home, in a foreign land.

“For this Hagar is Mount Sinai in Arabia” Galatians 4:25. Here we are clearly told where the mountain should be located, in Arabia. But where is Arabia? It is bordered on the West by the Gulf of Aqaba and the Red Sea. This clearly rules out the Sinai Peninsula, but it does include Saudi Arabia of course. “Then, at this saying, Moses fled and became a sojourner in the land of Midian, where he had two sons. And when forty years had passed, an Angel of the Lord appeared to him in a flame of fire in a bush, in the wilderness of Mount Sinai.” Acts 7:29,30. All historically accurate maps, such as some produced by secular companies like National Geographic, show Midian in Saudi Arabia. Unfortunately, maps placed in Bibles by the publishers may have Midian in the Sinai Peninsula in order to fit tradition, but not the Bible or the historical record.

The new site at Jebel el Lawz fits all the biblical criteria and holds a lot more physical evidence supporting the biblical account of the Exodus of Moses and Israel – see: