When was He crucified, buried & resurrected?

Here is the proposed timeline: Jesus was laid in the tomb in a hurry, as sunset (the beginning of the Day of Preparation) was approaching (Mark 15:42). Joseph of Arimathea, wanted to properly bury Jesus before the beginning of the Sabbath day, took down Jesus’ body and wrapped it in linen. He then placed the body in the tomb (Luke 23:53; Mark 15:43). Luke’s account then says the women observed that He was buried as the Sabbath drew near (Luke 23:54-55).

By comparing the two Gospels—where Mark tells us the women bought spices after the Sabbath and Luke states that they prepared the spices before resting on the Sabbath—we gather that two different Sabbaths are mentioned. The first, as John 19:31 tells us, was the first day of the Feast of Unleavened Bread (Lev 23:5-7). The second was the weekly seventh-day Sabbath. Mark did not mention this weekly Sabbath in his gospel, but Luke, did.

Thus, if the weekly Sabbath started on Friday afternoon at sunset and we now know that there were an additional High Sabbath of Unleavened Bread (that could fall on any day of the week) on Thursday, the crucifixion must have happened on the Wednesday. The women then returned after seeing the burial on Wednesday afternoon, rested on the high-day Sabbath Wednesday night and Thursday, then bought the spices either Thursday night or Friday morning and prepared them on Friday prior to sunset and then rested on the weekly Sabbath from Friday sunset to Saturday sunset.

Then, early on the Sunday morning, before dawn, “while it was still dark” (John 20:1), they went to the tomb to apply the embalming mixture to Jesus’ body, they discovered that Christ had already been resurrected (Matthew 28:1-6; Mark 16:2-6; Luke 24:1-3). The only plausible explanation for the events of the crucifixion week is that Jesus was in the grave three full days and three full nights, from sunset on a Wednesday until sunset on the Saturday. He also fulfilled the third feast of First fruits (Lev 23:9-12) that started on the Saturday evening sunset and became our first fruits offering (John 20:17; 1 Cor 15:20).

Now, consider Christ’s promise that He would be in the grave for the same amount of time that Jonah was in the belly of the great fish in conjunction with this historical account. What is the correct way to understand “three days and three nights” in both Matthew 12:40 and Jonah 1:17? It means three literal days and three literal nights—72 full hours (Gen 1:5, Jesus: John 11:9).

If Jesus were in the tomb only from late Friday afternoon to sometime early Sunday morning, then the sign He has given everyone that He was the Messiah as prophesied, would not be fulfilled. The claim that He is the Messiah, sent by God according to the scriptures, rests on the fulfillment of His words—it’s a very serious matter.

When we allow the Scriptures to interpret the Scriptures, all four Gospel accurately agrees and attest to the validity of Jesus’ promise that He would be in the grave three days and three nights—not just part of that time.

Thus, Jesus rose late Saturday afternoon around sunset—not Sunday at sunrise—exactly three days and three nights after He was placed in the tomb just before sunset on Wednesday.

Jesus is the Messiah according to the scriptures and He was in the grave for exactly 3 days and 3 nights like He promised but because most people do not understand the biblical high holidays kept by Jesus Christ and His followers, they believe a Friday death and a Sunday resurrection is still the plausible explanation. 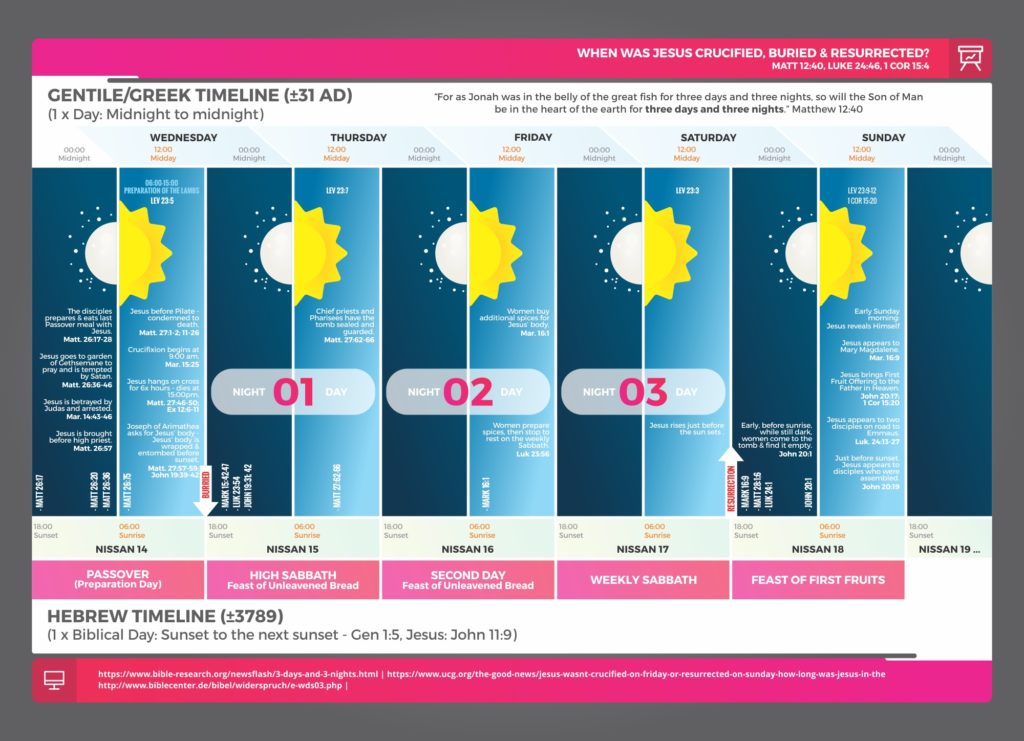